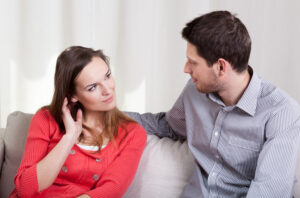 To complete the metabolizing process that is the goal of Neurodynamic Couples Therapy partners must be curious — wonder — about their own and their partner’s internal worlds.  The “wondering” spouse genuinely wants to know “Why did that word he said trigger me that way?”; “What does he mean when he says he feels invisible?”; “What happened to her that makes her get so angry so quickly?”; etc., etc., etc.  The wondering spouse isn’t trying to change anything — present or past — just fully understand it.

Unmetabolized childhood traumas usually truncate the ability to wonder.  They fill the potential of knowing with fear, hopelessness and rage.  The presenting problem in a couple I once treated was her complaint that he played too much golf.  As I began to get to know them and both of their experiences of this problem, I introduced the notion of being able to empathize with both of their experiences.  She quickly responded, “I don’t care about empathizing; I just want him to play less golf!”  Later explorations revealed the many meanings behind this somewhat provocative statement.  Not surprisingly, her inability to wonder about their experience was a way to protect herself against conscious awareness of the complete lack of wonder her parents had regarding her.  Wondering about troublesome interactions with her husband touched traumatic childhood wounds that she was afraid to know about.

The ability to wonder is not the same as the ability to imagine.  Imagination is a common self-protective mechanism that is frequently employed to avoid the pain of reality.  My client could consciously imagine that her husband playing less golf could somehow magically erase the pain of being an ignored child, while the nonconscious right brain was utilizing the golf conflict to bring her unmetabolized pain into the present, which she could not let herself wonder about.

The therapist’s job is to consistently and repeatedly demonstrate that wondering is not a dangerous endeavor, gently leading couples to do their own wondering about the origins of the feelings their conflicts have exposed.  Couples in the advanced stages of treatment have told me that their first clue to wonder was that they were being unsafe with each other.  They would then interrupt their usual conflict and wonder together, “Why are we doing this?  What are our right brains trying to offload?”  Their ensuing conversations ushered in new levels of understanding — an important step on the road to metabolizing.

Uncategorized
What to Say That Fits the Frame
Mutual Empathy