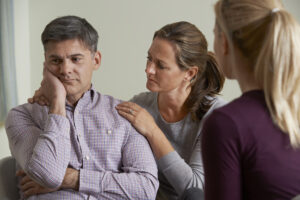 The previous blog post ended with the question “What comes after wondering?”  The answer is mutual empathy.  Wondering and exploring about the meanings of intimate partners’ triggers and the feelings they expose must lead to empathy in order for metabolizing to occur.  I have had occasions when a consultee will say about a couple, “They seem to understand each other, but they’re not getting better.”  They are not feeling their partner’s pain; the work is remaining intellectual.  Without the final step of empathy, the feelings will recycle back into the right brain to be relived another day in another drama.

We all know this word “empathy”.  It comes from a Greek word that essentially means “in suffering”, implying that the act of empathizing requires experiencing another’s feelings as if we are “in” them ourselves.  Merriam-Webster.com states, “One who empathizes suffers along with the one who feels the sensations directly.”  Couples who are engaging in mutual empathy offer up their own willingness to feel pain on each other’s behalf.

In the case that was described in the previous post, the wife who stated, “I don’t care about empathizing; I just want him to play less golf!” was expressing several reasons that she was resisting empathizing with her husband.  First, I believe that she was afraid that the empathy would not be mutual–that she might offer empathy to her husband and he would make no effort to reciprocate.  With her parents, this fear was completely based on reality, which was what her right brain was compelling her to relive.  The recycling dramas in this marriage dictated that both partners would approach each other’s needs with callous disregard in order to bring all of their similar childhood feelings associated with that disregard into the present.  Their fears that empathy would only make things worse were completely understandable.

In my experience, many clients fear that empathizing is equivalent to abandoning their own feelings, agreeing that they are wrong about their perspective and only their partner’s is “empathizable”.  Because some couples’ dramas call for the roles of “good guy” and “bad guy” to be split out between the two partners, it can be quite challenging even for the therapist to equally empathize with both.  Believing in the principle that both partners’ brains are equally participating in creating a scenario in which simultaneously experienced, mutual empathy can eventually be found stands the therapist on firm ground.

The therapist must shepherd a couple through enough in-depth discussions about their mutual triggers that a genuine, heartfelt experience of both partners’ feelings is viscerally present and observable.  Engaging both the left and right brain is necessary to generate an intellectual understanding and a purely gut reaction, translating previously inscrutable communications into a whole-body sensation of truly “feeling their feelings” together.  Common clues that mutual empathy has been reached during treatment are quiet contemplation, tears, a shift in the “feel” of the room, and a desire to comfort in both partners.