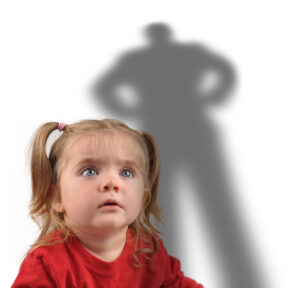 At the end of my last post, I wrote about the shame connected to childhood abuse that must be relived in couple relationships.  Couples in which one or both partners were victims of childhood abuse will likely also be reliving terror.

Terror is the feeling that leads to a flight or freeze response.  The victim experiences such extreme threat to their continued existence or mental integrity that their fear expands into terror.  The helplessness that accompanies traumatic experiences is at its height when a person is terrified.

The foregoing paragraph explains why partners who have felt terrified in their childhoods are highly likely to have dissociated their terror.  Our brains cannot handle conscious awareness of heightened threat for too long, particularly when we are young children.  So, getting access to dissociated and unmetabolized terror happens symbolically and metaphorically in the recycling dramas of couple relationships.

Typically, this means that one partner has to play the role of the victim and one the perpetrator.  The right brains of partners will gradually nonconsciously construct experiences in which the perceptions they have of each other match the roles that are necessary to access the historical terror.  I knew of a case in which the wife had grown up with a psychotic mother who frequently terrified her with erratic behavior and threats to commit suicide.  She had to perceive her husband as “scary” in order to access and verbalize the words she had not been able to say to her mother — “Stop it, Mommy!  You’re scaring me!”

Of course, there can be tragic, frightening events in people’s lives that are not generated by their caretakers — serious illnesses, accidents, fires, war.  The amount of terror that remains unmetabolized in the brain of a child experiencing these types of events will depend on how their caretakers respond to the threatening event.  If the parents are not overwhelmed by their own fears and help the child process the event at an age-appropriate level, their feelings can be metabolized and not have to be repeated in adult relationships.

However, if the parents cannot deal with their own terror, that dissociated terror becomes part of what we have come to label the intergenerational transmission of trauma.  In this case, couples might be enacting not only their own terror, but that of their parents and even sometimes their grandparents.  For instance, there is a lot of literature about this phenomenon with Holocaust survivor families.

I have frequently described the care that must be exercised by the therapist when the victim and perpetrator roles that are necessary to relive terror result in domestic violence.  It is common for the reliving of childhood terror to be prompted by one partner terrorizing the other.  This is a natural, nonconscious process to prompt the reliving of both partners’ historical terror.  One partner’s brain has conscious access to terror, and the other’s to rage in an attempt to bring both dissociated feelings into conscious experience.