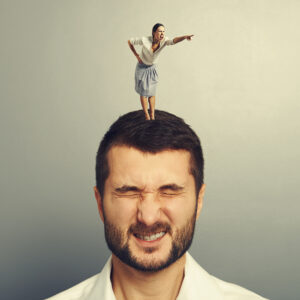 Because the emotion of shame usually derives from having done something “wrong” in the eyes of significant others, it is inevitably part of every important relationship.  That look of disapproval or disgust that accompanies shame-filled experiences is such a blow to our self-esteem that creates so much subjective pain; it is no wonder we avoid this feeling.  This leads to unmetabolized shame that is going to be relived in couple relationships.

Traumagenic shame is commonly relived by intimate partners in one or more of three enactments:  1) affairs; 2) other chronic patterns of deception; and 3) domestic violence.  Although it often appears that there is a guilty party and an innocent party in these enactments, both partners are reliving their own specific historical patterns of shame.

In affairs, the cheating partner looks like the one who should be ashamed of their “bad” behavior, but the one being cheated on usually also feels ashamed of getting fooled and being rejected as the chosen lover.  Because there can be so much emphasis from families and friends on retribution toward the cheater, the pain that this partner is experiencing around shame gets ignored.  The couples therapist is called upon to empathize with the shame of both partners, work toward eliminating blame, and help the partners verbalize the historical shame instead of getting stuck on continually processing only the affair.

Other chronic patterns of deception involve secrets and lies about many aspects of the relationship — hidden information about finances, promises not kept, intimate details shared outside the relationship, misrepresenting where you are and who you’re with, inaccurate details about substance abuse, etc.  Again, it is compelling for partners to get stuck on making judgments about each other’s character flaws, because the underlying and unmetabolized childhood shame that is driving these enactments is not conscious.  The therapist’s job is to guide explorations toward the historical shame, rather than focusing on correcting current behavior.

It is widely accepted in mental health circles that the appearance of domestic violence in an intimate partnership is always the reliving of historical violence, often in both partners’ childhoods.  Survivors of childhood abuse of any type carry tremendous loads of shame about having been the object of someone’s out-of-control aggression, usually believing at some level that they must have “deserved” it.  When old shame is being enacted through couple violence, the therapist must walk a fine line between establishing safety for the treatment and gradually helping both partners talk about their old traumas.

Couples therapists must keep in mind that the exposure of the “bad self” which is necessary when couples are reliving shame is agonizing to both partners.  Significant care should be employed to reassure the partners that there is nothing inherently wrong with either of them, and that, in fact, they are engaging a natural process to use their relationship for healing.  In order to “meet” the suffering children and give them a voice, they must suffer together in the present first.