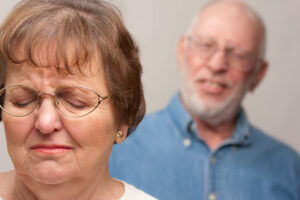 In their victims and villains dramas, both partners are reliving roles that are unsafe to the relationship and to themselves.  The role of victim requires feeling powerless (and denying responsibility) regarding both the beginning of a conflict and the solution.  That partner experiences something like, “I did nothing to start this problem, and I can do nothing to stop it.”  The partner nonconsciously forced into the villain role is usually reliving the same position assigned to her or him in the family of origin–the “bad kid”, “black sheep”, “troublemaker”.  That partner is accessing for both partners feelings of shame, as well as the more obvious anger.  The experience of the villain in a marriage is often, “No matter what I do, I’m not good enough.”

The aim of these dramas is to help both partners relive all of the emotions that are still trapped in their brains about the victimizing that they actually received at the hands of their parents or early caretakers.  The one in the victim role is acting out all of the feelings that both partners have stored about being an innocent and helpless child who is being harmed.  The one enacting the villain role is accessing the natural feelings of rage and resentment that the child they both were had to keep nonconscious to survive in their families of origin.

The power of the nonconscious as it dictates victims and villains dramas often forces both partners to experience themselves in the present in a way that can seem abhorrent to their conscious sense of self.  They can eventually behave and react in ways that they never would have imagined they could.  Both partners can experience thinking “Who are you and what have you done with the person I married?!” or “Why in the world did I do/say that?!”  This pattern of caricatured partners can lead to extreme and dangerous forms of these dramas such as affairs and domestic violence.  Society at large gets involved in assigning blame in these painful and destructive enactments of powerful childhood feelings.  It then becomes much more complicated to see the equal vulnerability and equal responsibility of both partners that Neurodynamic Couples Therapy repeatedly emphasizes.

The skillful therapist guides a couple toward awareness of the childhood feelings they are enacting in their victim and villain roles.  Fostering the development of empathy for the pain and shame both partners are reliving is the goal.