The Perfect Language of Couples Complaints 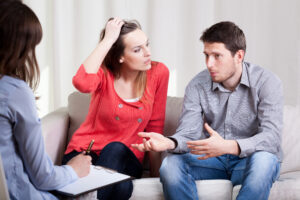 All psychotherapists know the importance of language.  We pay close attention to exactly what our clients say and how they say it.  In this post, I will share a case that illustrates how the perfect language of couples’ complaints provide the roadmap for their treatment.

The wife begins a session: “I can’t stop being angry at him.  I don’t know why he would do what he did unless he just doesn’t love me.”  Husband: “But I DO love you.  I have told you so many times how horrible I feel about what I did to you.”  Wife: “It doesn’t make sense any other way.  Why would you get involved with another woman unless you don’t love me?”  Husband: “I can see why it might look that way, but I’m still here with you, and it’s been 20 years since my affair was over.”  She makes two more attempts to get him to admit that he doesn’t love her.  Finally he blows up, “OK, you’re right, I don’t love you!” and storms out of my office.  This was the end of my third session with them.

They had played out an enactment (recycling drama) for me that had happened many, many times in their relationship.  I was clear that the words “You don’t love me” were the perfect language for this couple to relive childhood feelings, and I was also quite curious why her brain was so compelled to push him into saying the precise words it needed to hear.

The husband starts the next session by apologizing for leaving the last time.  I accept his apology and say that we have some work to do to figure out why he would shame himself that way.  Addressing the wife: “You seemed quite determined last time to get your husband to say he doesn’t love you.”  With some annoyance she says, “Well, how could he walk out on me if he loved me?”  Me: “I agree that having an affair is an unloving act, but I think it’s possible that your brains have spent many years trying to experience that both of you feel unworthy of each other’s love.”

As we worked, we experienced together the many feelings that were attempting to be accessed by using the words “You don’t love me.”  She had been a victim of childhood sexual abuse at the hands of a next-door neighbor, with whom her parents were friends.  When she was 18 years old, her mother invited her perpetrator to Christmas dinner and told my patient to “be nice” to him!

The husband described his mother as “emotionally fragile”.  Invariably he would fail at precisely meeting her needs, and she would say to him “You just don’t love me”, leading him to jump on his bicycle and be gone for several hours.  Together their brains had found the perfect words to prompt the reliving of all the pain and anger associated with feeling unworthy of love.