The Difference Between Hurt and Harm 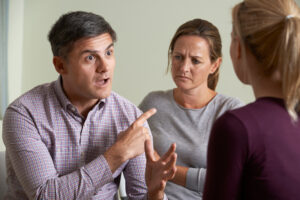 A frequent complaint that therapists hear from couples when they enter treatment is that they have felt hurt by each other.  They want to tell us all about the pain that their partner has inflicted on them, and they often seem to want the therapist to declare which one of them has been the “most” hurt.

The difference between hurt and harm can be conceptualized as two points on the ends of a continuum–from the most innocent forgetting to a lethal beating.  A defining aspect is the intention of the injurer.  Hurt is frequently (consciously) unintentional in intimate relationships.  I’m sure that you are all aware that being close to someone leaves us vulnerable to hurt.  There is no way to navigate an intimate relationship, while being true to yourself, without risking hurting your partner’s feelings.

Harm is a different “animal” (double entendre intended!).  Harm produces damage–sometimes permanent damage–and it is often intentional on the part of the injurer.  Similar to rage, harming comes from more primitive structures in the brain, whereas hurting involves more cognition.  The impulse to harm is a self-protective reaction to a perceived serious threat.  In families in which violence is a common occurrence, all slights by significant others are perceived as serious threats, leading to a learned response that all harming is justified–that it’s okay to “take a hatchet to a fly”.

A major task in couples treatment when harm has occurred is to determine intent.  A consultee presented a case in which the husband had become enraged at his wife, hit her in the face, and caused permanent damage to one of her eyes.  After a period of separation recommended by the therapist, the couple decided to return to treatment.  The husband expressed massive shame and remorse, making clear that he had never intended to harm his wife.  Their work in therapy together revealed the childhood drivers of his rage, and his volatility toward his wife stopped.

In contrast, if a partner intends to harm their mate, they have demonstrated that they are not developmentally capable of being safe for the treatment and for the relationship.  The therapist can attempt to explore with this partner what their intent to harm is about to see if safety can be established, but the prognosis for couples treatment in this situation is extremely poor.

The most common manifestation of the hurt/harm continuum in couples treatment is the merging of the two.  A partner has been hurt, but they feel harmed.  They have a hard time letting it go, apologies and remorse by the other are not enough, and the pain seems unremitting.  The therapist must work carefully to validate both the hurt and the harm–without blame–and to explore these feelings in depth to help both partners experientially understand the historical harm that has been exposed.  Metabolizing the harm is the neurobiopsychological purpose of the hurtful episode.

Next post:  The “balancing act” of the couples therapist

Uncategorized
Reliving Rage
The Delicate Balancing of the Couples Therapist