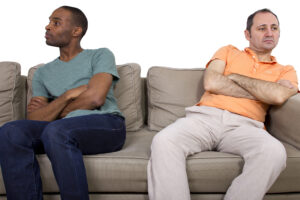 The concept of needing conflicts is central to understanding how Neurodynamic Couples Therapy heals.  Some other forms of couples treatment characterize conflict as simply an important avenue for communication and negotiation between partners.  A popular notion of marital health says that couples have to fight in order to work out their differences–i.e., partners who fight together stay together.  Our idea of needing conflicts is quite different from these.

The conflicts that are played out in a couple’s recycling dramas come out of programming in their right brains designed to bring to awareness historical feelings that have not been metabolized.  We believe that these conflicts are necessary to present the best opportunity nature has to offer to heal childhood wounds, traumas, and losses.

In the system created by the joining of two brains into a life partnership, each partner has roles to play that will automatically expose the feelings that are waiting to be healed.  For example, a woman with a history of abuse during her childhood brings her husband to therapy because he has a “bad temper”.  Through the years of their relationship, she has nonconsciously exacerbated his temper outbursts by telling him there is something wrong with his anger so that her brain can experience him as being just as dangerous as her abusive father was.  Although consciously defending himself, her husband has nonconsciously accepted her characterizations of him, because they match the negative judgment of angry feelings he heard in his family of origin.  Their conflicts have helped them expose unmetabolized feelings from their childhood histories.

Labeling the couple’s conflicts as helpful moves the therapeutic process away from judgments and changing behaviors.  His temper is not the problem.  The conflict around his temper is a golden opportunity to feel in the present historical issues that likely will not come to consciousness any other way.  Her brain needs his temper outbursts, and his brain needs to experience her disdain for his anger.

Needed conflicts have a “script” that has been established through intimate partners nonconsciously training each other to behave and respond in the manner that will force old feelings to the surface.  He says x, and she always responds with y.  Sometimes the conflict script calls for silence from one or both partners at just the right moment.  There is a “mutual dance” quality to their roles that disregards the objective truth of the current situation.

Neurodynamic Couples Therapy distinguishes conflicts from disagreements by the ease with which they are resolved.  All partners have disagreements from time to time.  If they can negotiate a solution to their differences, even if that negotiation includes arguing and emotional upset, our system of treatment would not call this conflict.  Conflict is characterized by circular arguments that are repetitive, lead to regressed states of emotional turmoil, and never reach resolution.  These are the avenues for exposing unmetabolized feelings from childhood through an intimate relationship.