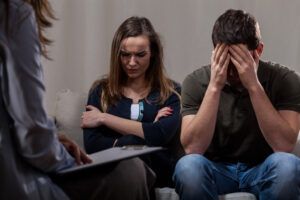 The primary purpose that shame/reunion dramas fulfill in couple relationships is to bring the feeling of shame into conscious awareness so it can be metabolized.  There are often secondary emotions being felt simultaneously, but shame is prominent.  Because shame is one of those “hot potato” feelings that no one wants to be left holding, the roles in these dramas can take many forms.

Often one partner is the shamer and one is the shame-carrier for both partners.  The shamer regularly finds fault with her or his partner and expects the other to accept all of the blame.  Sometimes the fault-finding switches back and forth, such as in the competition dramas that you read about in a previous blog post.  The competition is about which one of them should feel the most shame and therefore get stuck holding that “hot potato”.  In a third role structure, both partners were shamed for the same reasons in their childhoods.  In this case, they will both try too hard to ensure that neither one of them ever feels the old shame, such as working overtime at making sure the other is always happy.

The childhood reunions that are being repeated in these dramas are actually an attempt to shut down the shame as quickly as possible, rather than give it time to be felt and metabolized.  Even in the most extreme and destructive forms of shame/reunion dramas–such as affairs and domestic violence–where it appears that there is clearly a shameful, “bad” actor, both partners have been nonconsciously forced into a role that brings up their own shame.  A reunion that dictates admitting you’re just “bad” does not heal shame, any more than does being in the shameless position.

This aspect of Neurodynamic Couples Therapy is potentially the most healing for the couple’s relationship and for both individual selves.  Dealing with shame is one of the most difficult parts of being human, but mentally healthy adults must learn to consciously feel and manage it.  Being in a safe environment where judgments cease, where even hurtful mistakes are described as an attempt to grapple with the “bad self”, and where both partners can finally feel loved and valued as flawed human beings is transformative.

In treatment, the shame/reunion cycle must be interrupted in order to hold both partners in a state of containing and verbalizing their own shame, instead of shutting it down through the old type of reunion.  True regret can be expressed, but the goal is to help both partners see their drama as an attempt to help both of them metabolize shame.  All types of retribution or labeling each other’s character must be identified as unsafe to the relationship and to the treatment.  The couple must be guided toward a new type of reunion in which they empathically help each other experience their own shame as valid, real, and bearable.